How to evaluate research performance and efficiency of S&T activities? An attempt to find response on these and related questions was undertaken by the participants of the roundtable "Monitoring Economics of Science: Main Results and Development Prospects" that was organized by the HSE ISSEK at the 2nd day of the XIV April Conference.

How to evaluate research performance and efficiency of S&T activities? An attempt to find response on these and related questions was undertaken by the participants of the roundtable "Monitoring Economics of Science: Main Results and Development Prospects" that was organized by the HSE ISSEK at the 2nd day of the XIV April Conference.

The recent large-scale study performed by the HSE ISSEK was aimed at establishing a system of monitoring of economics of science that enables capturing, processing and disseminating data describing economic aspects of developing science in Russian Federation.  As noted by the chair of the roundtable, HSE First Vice-Rector Leonid Gokhberg, "Monitoring Economics of Science is a testing site to trial new tools of government statistics. In terms of contribution to methodological enhancement of statistics it is an unprecedented project".

Physical Infrastructure of Science in Russia

Head of the HSE ISSEK Department for Statistics of Science Svetlana Martynova made a presentation called “Inventorying R&D Organizations: Analyzing State-of-Art and Maturity of Material, Technical and Test Facilities of Science”.

Inventory, carried out in 2011, was aimed at capturing comprehensive data on state-of-art and level of development of R&D sector. Its results were compared with the outputs of the similar study performed in 2007. As observed, the major share in the breakdown of R&D fixed assets belongs to buildings and constructions (47.2 %) followed by machinery and equipment (43.9%) while the quotient of other resources (library stock and intangible fixed assets) is relatively small.

As to the organizations possessing unique test beds and installations for implementing research, development and technological activities, their number has significantly increased. Herein the positions of state enterprises have notably reinforced.  Along that, the ratio of state enterprises having the own test facilities, has significantly reduced, however the positions of higher education and non-profit sector became stronger. In general the study indicated the raise of physical infrastructure of science.

The extent of efficiency in converting resources (R&D expenditures, personnel, infrastructure) into bottom line was concerned by Konstantin Fursov, Leading Research Fellow of the HSE ISSEK Centre for Statistics and Monitoring of S&T and Innovation.

As measurable S&T results the study considered publications, patents, awards, technologies and innovative projects. Despite some lowering in the number of researchers that published their articles and monographs relative to 2007, the number of publications prepared jointly with abroad authors has increased significantly (the leadership of public sector representatives in this regard is noteworthy).

In terms of number of publications in peer-reviewed journals higher education sector still maintains the lead, to a large extent owing to the number of editions published by the universities their selves.

In terms of innovation potential there is a solely positive dynamics: the number of technology innovation projects adopted in business organizations grew by 28.9%, and the number of large scale projects (cost over 50 million rubles) — rose by 72.3%. 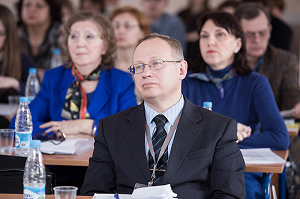 The study of technological level of production of Russian medium and large enterprises was presented by the Head of the HSE ISSEK Department for Research of Intellectual Property and Technology Transfer Galina Sagieva. It was aimed at getting an objective view on achieved technological level of organizations, state-of-art of their innovation activity as well as identifying factors influencing on technology level of production.

The study covered such areas as the level of technology used in production, the technical level of production and fixed assets, as well as innovation activities of organizations. "There has been a pronounced trend towards the use of technologies developed in-house and weak activity of organizations in the domestic and especially foreign technology markets. To a large extent this is typical for activities related to the use of computers and information technology, the implementation of research and development ", — noted Galina Sagieva.

The researchers also paid particular attention to different types of improving technologies. For example, the most widely used technologies that provide improved product quality (61.7% of enterprises) and ensure more efficient production processes (51.1%), the least demanded — environmental (30.9%), resource- and energy-saving (35.4% each). The study detailed the features of the companies’ distribution by total book value of fixed assets (two polar categories of organizations dominate here — the mentioned indicator consist more than 50 million and less than 5 million rubles per company, respectively).

"The study revealed an insufficiently high technology level of production, so a permanent monitoring is required to track the dynamics of its development and the changes taking place," — concluded Galina Sagieva.

Particular attention of the roundtable participants was attracted to the report by a Junior Research Fellow of the HSE ISSEK Anton Suslov on the results of the study of unobserved activities in the R&D sector, undertaken in order to identify and describe all the organizations and research groups performing R&D that are uncovered by official statistics, as well as to calculate basic indicators of unobservable activities in the field. The study considered organizations that perform R&D, but aren’t covered by the reporting on a special questionnaire (small businesses and individual entrepreneurs), as well as researchers and research groups that perform R&D without legal registration of the employment relationship (informal, underground activities). It was conducted by questioning heads of organizations and interviewing experts on the shady activities in the R&D field.

The results showed that in 2011 among R&D performers there were about 7.5 million organizations that remained outside the federal statistical observation. 96% of them carry out research on an ongoing basis, while 70% consider R&D as the main activity. At that 95% of these organizations are privately owned. Gross domestic R&D expenditure amounted to about 48.5 billion rubles, and only a quarter of the financial resources made the budgets of all levels, 51% — internal funds, 20% — means of the entrepreneural sector. As to the personnel engaged in R&D, its population was just under 53 thousand people, the share of researchers in the total number of personnel involved in R&D was 69% and the average monthly salary — 22.8 thousand rubles. According to experts, informal employment in the field of research is gradually reducing, and now its scale is small. With that shadow activity itself does not distort the number of researchers, as almost all the "informals" are employees of any scientific organization.

The role of universities in research and innovation

The university sector is one of key actors in scientific activity, so it was considered by the HSE ISSEK senior researcher Stanislav Zaichenko in his presentation called "Russian Universities as Actors of Research and Innovation".

In total, the monitoring was considered 268 public universities. Their performance was measured by the resource (organizational, personnel, financial), performance (R&D effectiveness, innovation) and other indicators (integration of science and education, interaction with public authorities and the business sector). The study resulted in defining of so-called strategies of excellence for the Russian universities.

In comparison with the data obtained in 2007, the level of international activities of universities has grown significantly, as follows: increase in the number of publications in scientific journals indexed in databases SCOPUS and Web of Science, as well as in the number of applications for invention patents abroad. However this project should be further developed by expanding the sample and set of the primary indicators, as well as by diversifying the approaches to the evaluation of higher education institutions. This would enable the elaboration of the strategy for increasing the international competitiveness of Russian universities, as well as proposals for the standard methods of assessing the universities’ STI performance and the application of evaluation as part of public STI policies.

The discussions have outlined the areas of research in economics of science as follows: the creation and support of a unified system for the collection, processing, analysis and presentation of data from regular surveys on specific topical areas of R&D sector; improving the methodology and tools of the existing statistical monitoring of the R&D sector; updating the system of monitoring indicators in economics of science. Thus, the development of science as a field of the Russian economy will be accompanied by the development of the relevant sector of statistics and economics.